The Steve Willis Memorial Fund is a special cause that’s very close to the heart of Red Chilli. A proportion of all of our sales goes towards the fund and we organise regular fund-raising activities, which have in the past included a St Andrew’s Ceilidh, a comedy show courtesy of Jane Bussmann (author of “The Worst Date Ever…Or how it took a comedy writer to expose Africa’s Secret War”) ,a run/cycle from Red Chilli Murchison to Red Chilli Kampala and a safari party weekend in Murchison.

Where do the funds go?

The vast majority of people in the area surrounding Murchison Falls are still drinking out of traditional water sources – very often little more than a stagnant pool or spring – and so disease is rife. The Steve Willis Memorial Fund seeks to help those who have been afflicted by the LRA by providing clean drinking water and providing education in hygiene and sanitation. Working hand-in-hand with The Water Trust, a US based charity with offices in Masindi, the Steve Willis Memorial Fund has so far funded 28 boreholes or borehole rehabilitations in villages, schools and health centres. Our most recent donations meant that four borehole rehabilitations were opened in August 2019 in areas where many northern IDP’s settled as a result of the war. The Water Trust also trained self-help groups in these locations in order to improve management sustainability. The following links give more details on the 3 schools and 1 village that obtained clean drinking water from the Steve Willis Memorial Fund this year.

So who was Steve Willis?

Steve was born in the UK on 29th August 1967. He came to Uganda in 1995 with the Foreign Office but left the diplomatic service out of love for Uganda rather than return to London a few years later. Steve and his wife, Debbie, set up the fledgling Red Chilli Hideaway in Kampala in 1999 and the Murchison Rest Camp joined the Red Chilli brand in 2002. On the 8th November 2005, whilst responding to a distress call from a group of explorers in the north of Murchison Falls National Park, Steve and his party were ambushed by LRA rebels and he was tragically shot and killed. 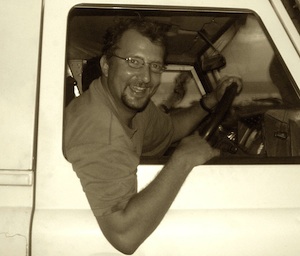 It was so typical of Steve that he should risk his own safety in order to go to the aid of someone he believed to be in distress. His humanitarian gesture cost him his life and deprived his family of a husband to Debbie and a father to Joseph (then aged 2) and a then unborn daughter, Zoe. Debbie continues to run The Red Chilli today (with an awful lot of help!) and raising money for others whose lives were also affected by the LRA is an important way of keeping Steve’s name alive, as well as helping some desperately needy people in northern Uganda.

What can you do?

Simply stay at Red Chilli, play a game of pool, swap a book or buy some of our local crafts and you will be contributing towards the Steve Willis Memorial Fund. Look out for special events too! If you would like to make an independent donation, please get in touch with us via this website and we will very happily pass on bank details…many many thanks!!!